(Un)Balance is an experience in XR (extended reality) which rethinks human-spaces interactions by foregrounding the notion of embodiment. It provokes body awareness, movement and exploration.

(un)Balance was developed at the Interactive Architecture Lab through a series of iterations and prototypes tested namely at Ars Electronica Festival 2018.

Here I will take you through this process which lead to the final experience design. 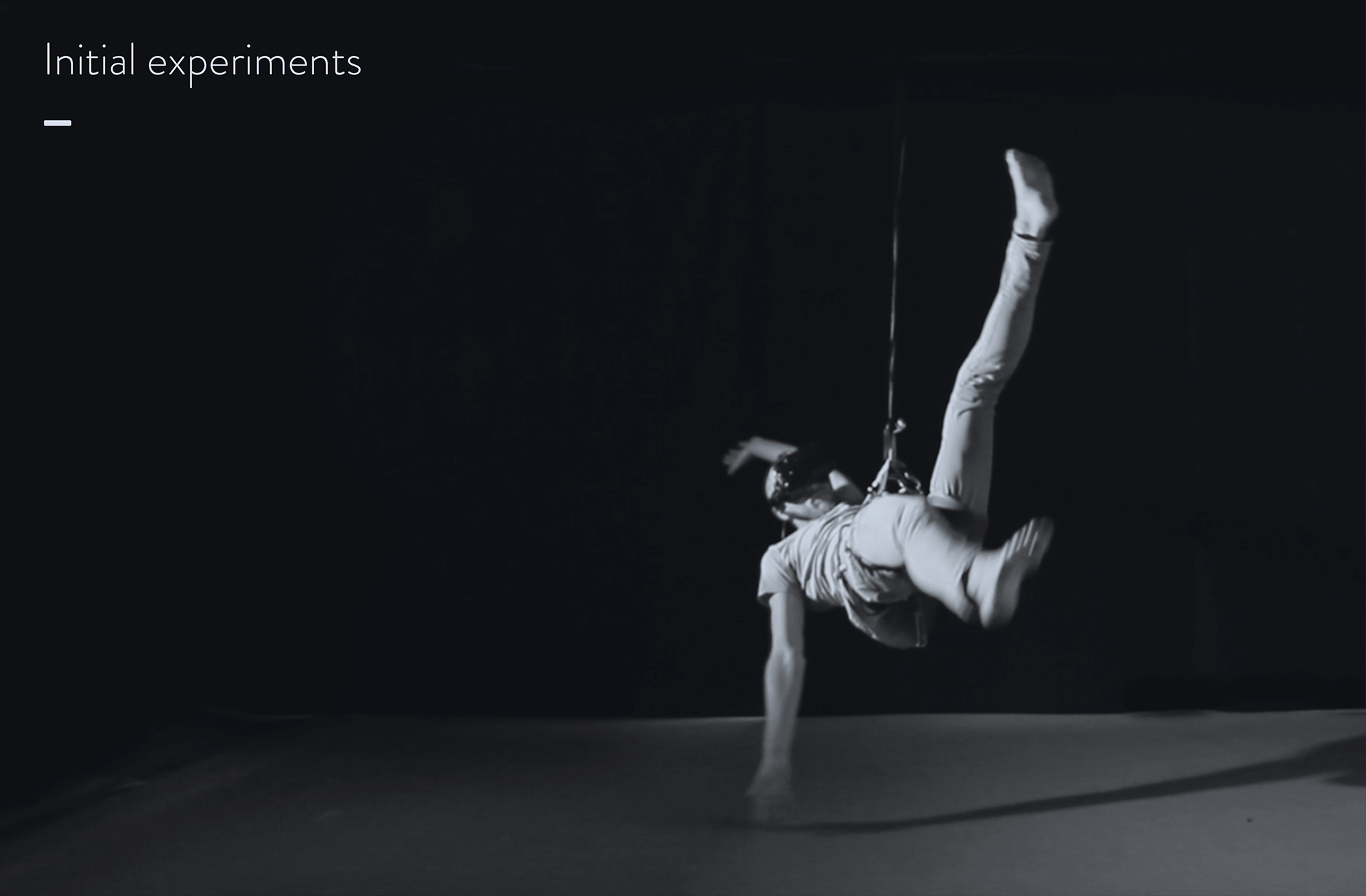 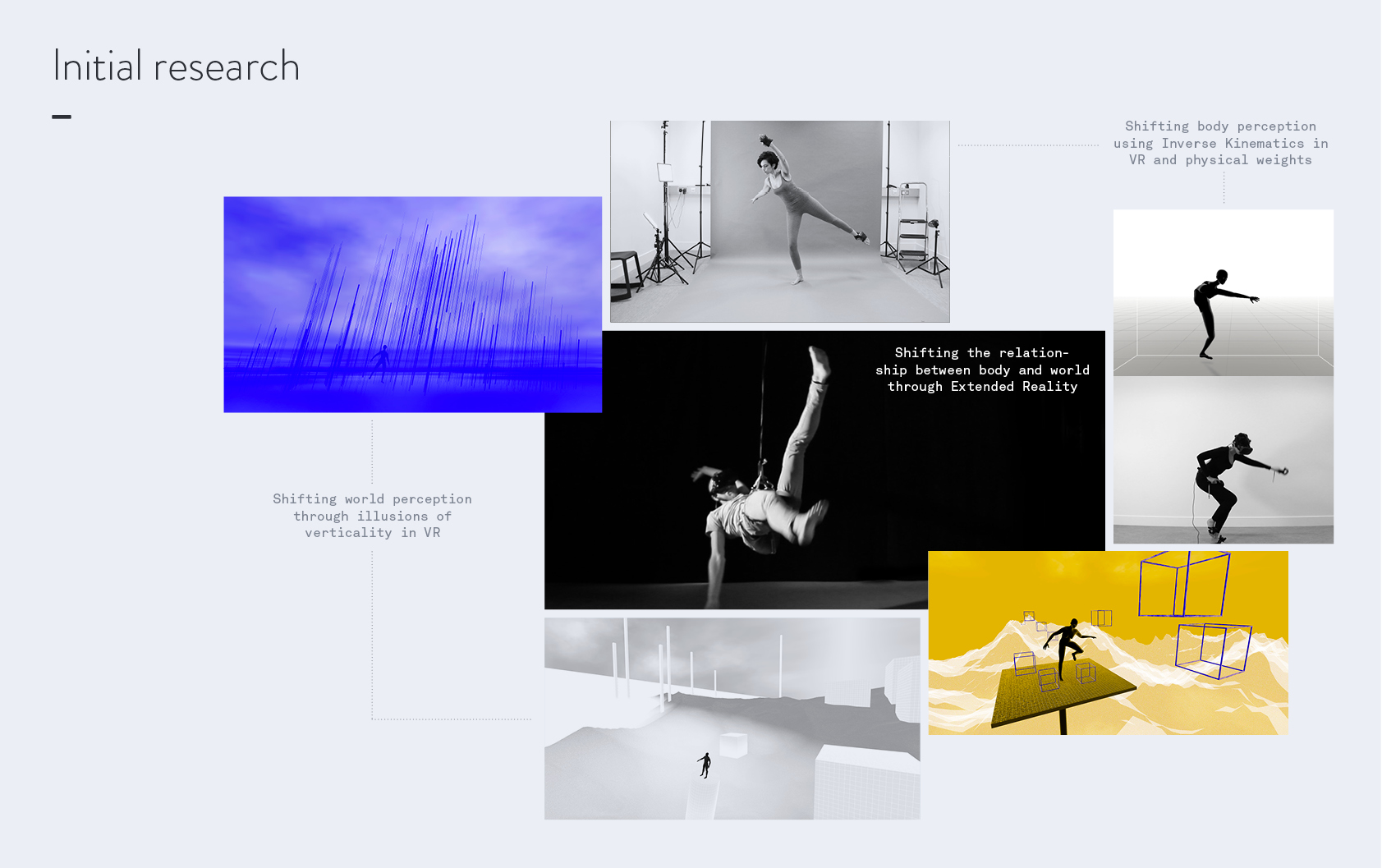 The notion of balance came as the node of the experience, as a way to engage the whole body from core to extremities. 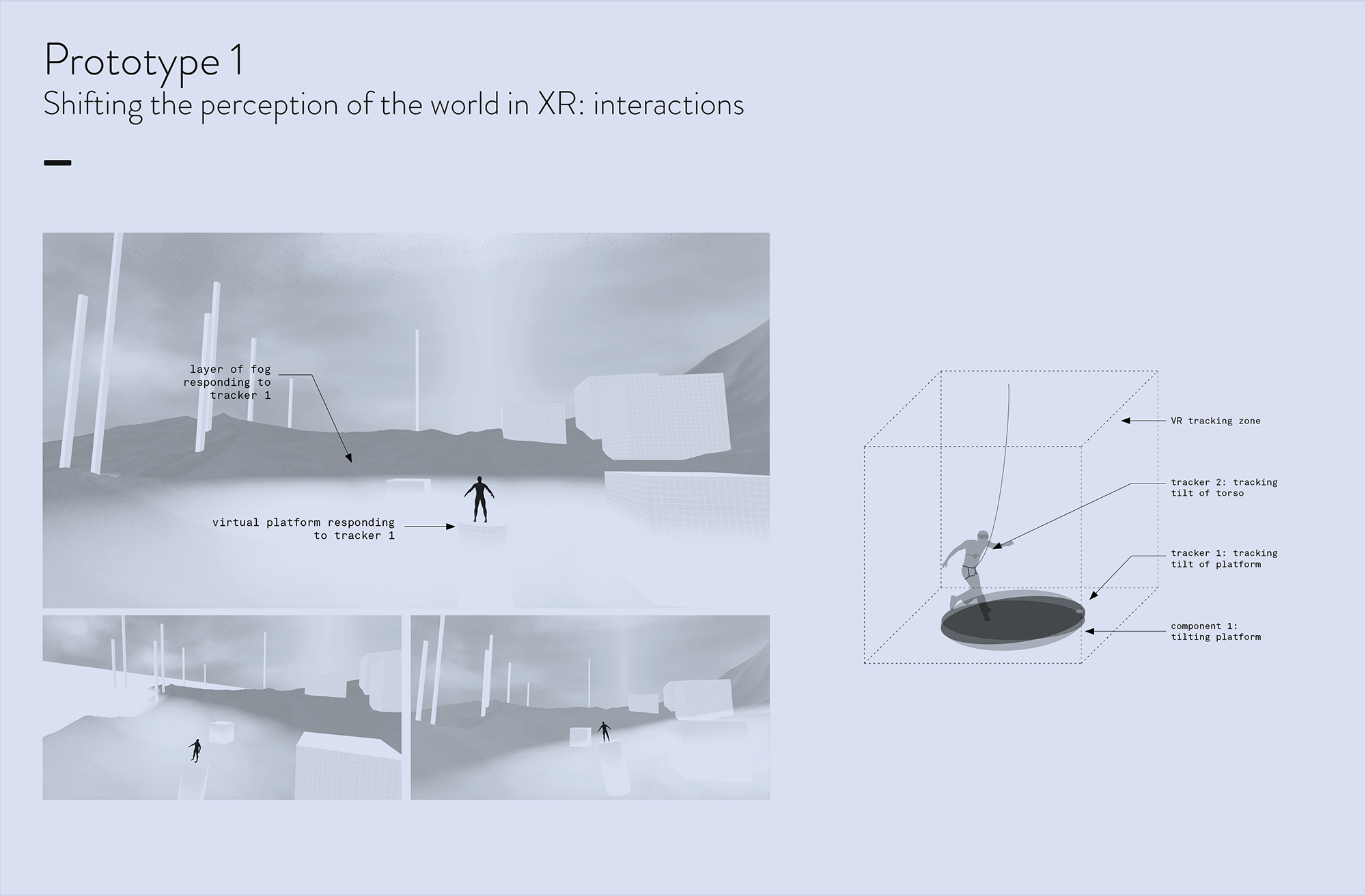 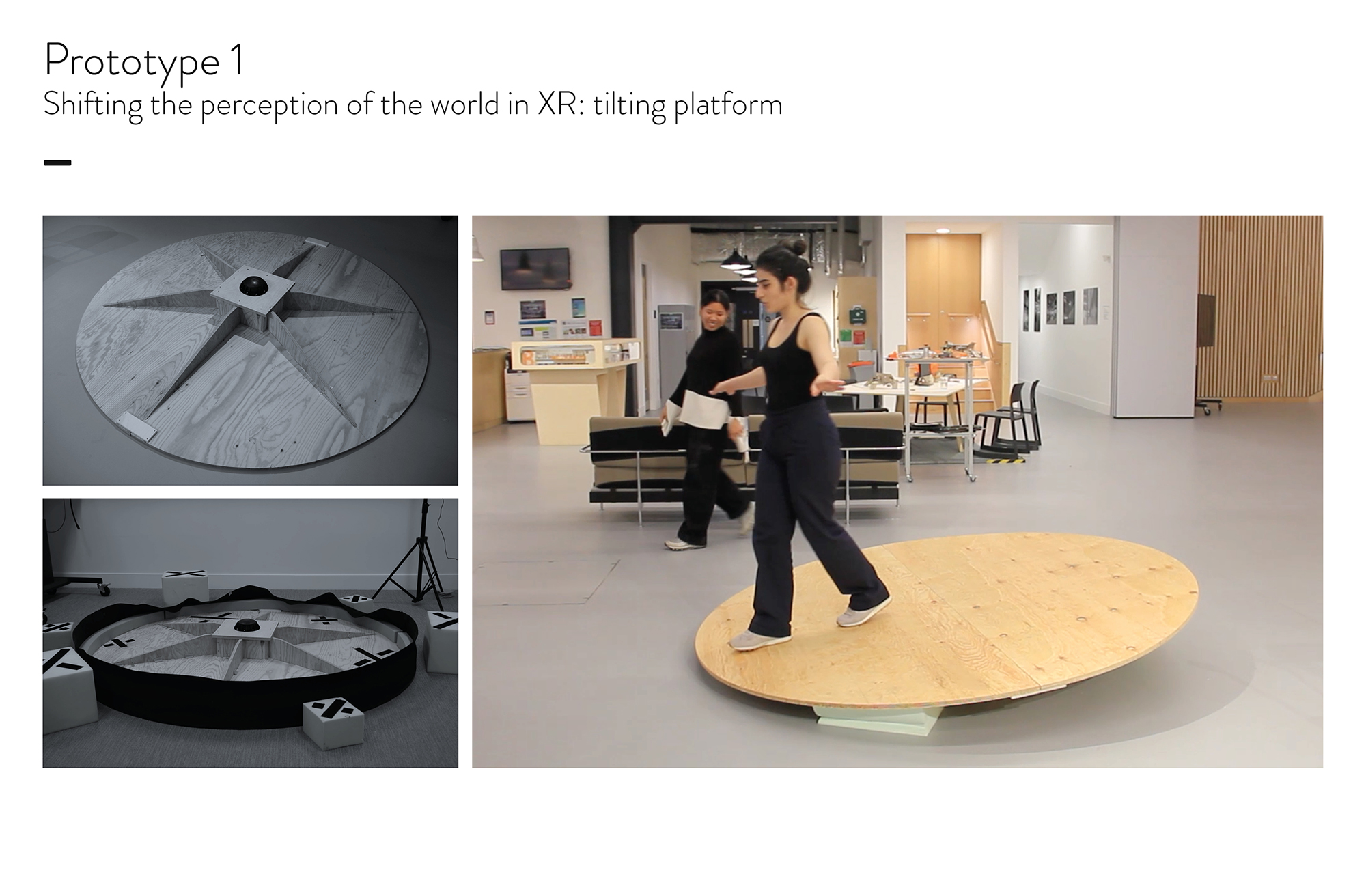 Prototype 1: Encouraging movements through shifting the perception of the world in XR

The first element of this experience is a tilting platform. Pivoting around its centre, it is cushioned by foam blocks. While the participant explores the world, causing the platform to tilt, the horizon of the world and rain like particles in the sky respond to the rotations of the platform. This resulted in the attention of the participant being directed outwards and slow to very fast movements engaging mainly the bottom half of the body. 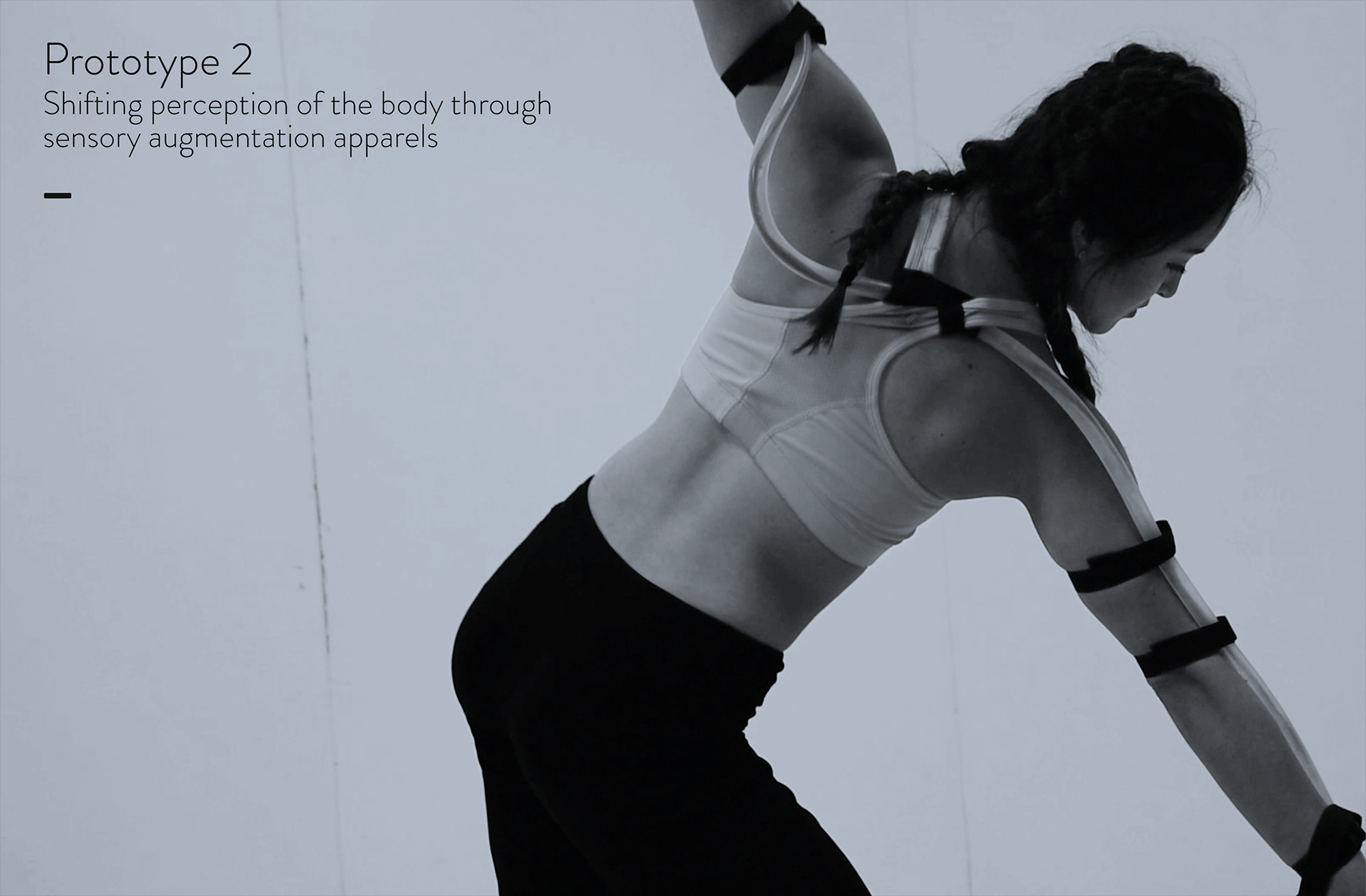 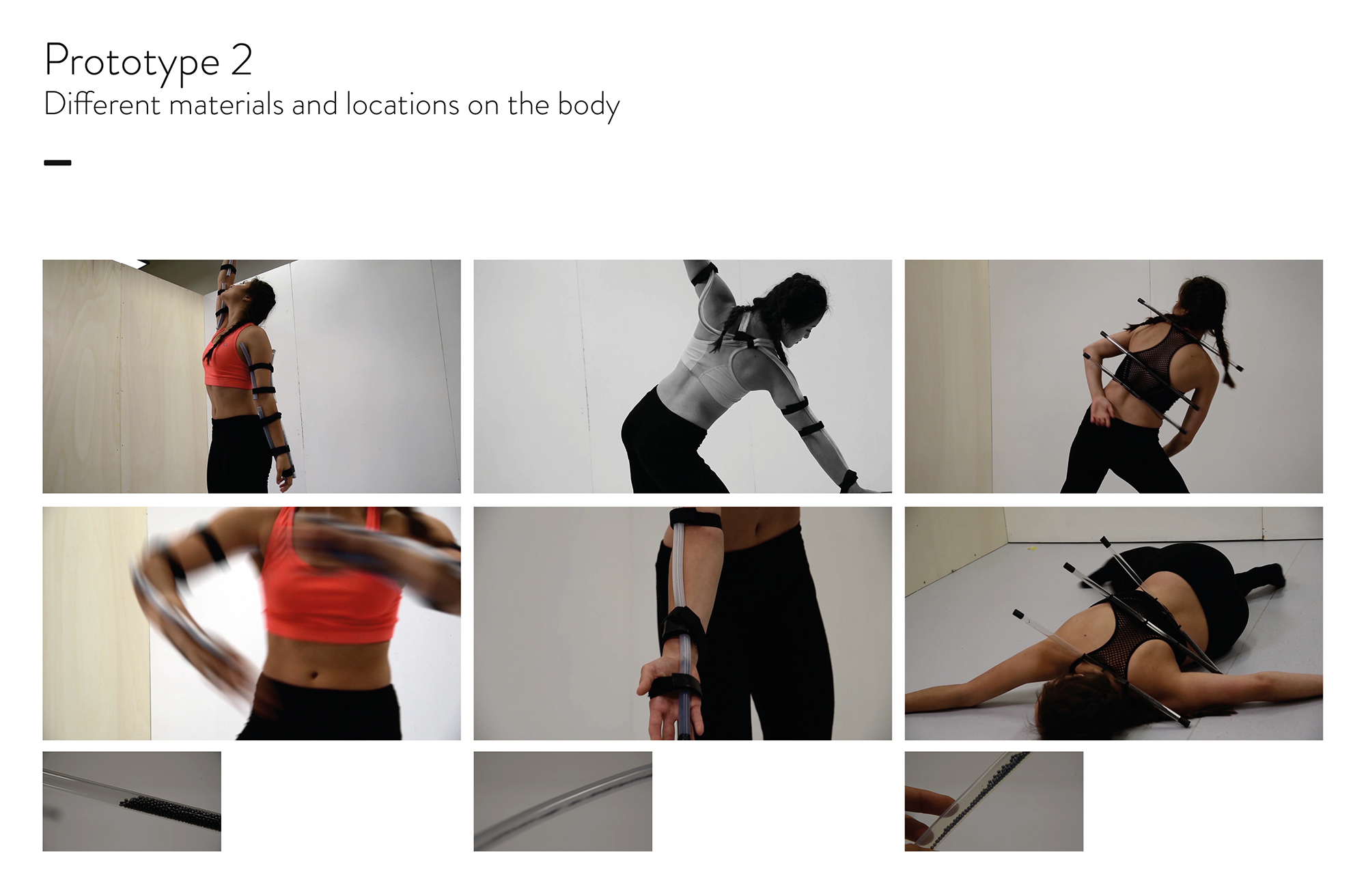 Prototype 2: Encouraging full body movements through augmenting the perception of the body in movement.

Following the first prototype, I focused on ways to engage the upper part of the body in the experience. In this aim, I developed wearables allowing an additional weight to be displaced on the body while moving. Different materials were used, giving the wearables more. or less linear responses. Different locations on the body were also tested. Working with dancer Tia Hockey, I analysed how different parameters would influence movement exploration, encouraging different qualities of movement, in the form (curve or lines)but also in the speed and force (slow, impulsive, projective, pauses). The haptic sensation of the beads vibration as well as their sound feedback became an integrant part of the design, adding layers of information guiding the participant. While the combination of the platform and apparels are successful with a professional mover, the same experience does not fully involve the widest more inhibited audience. 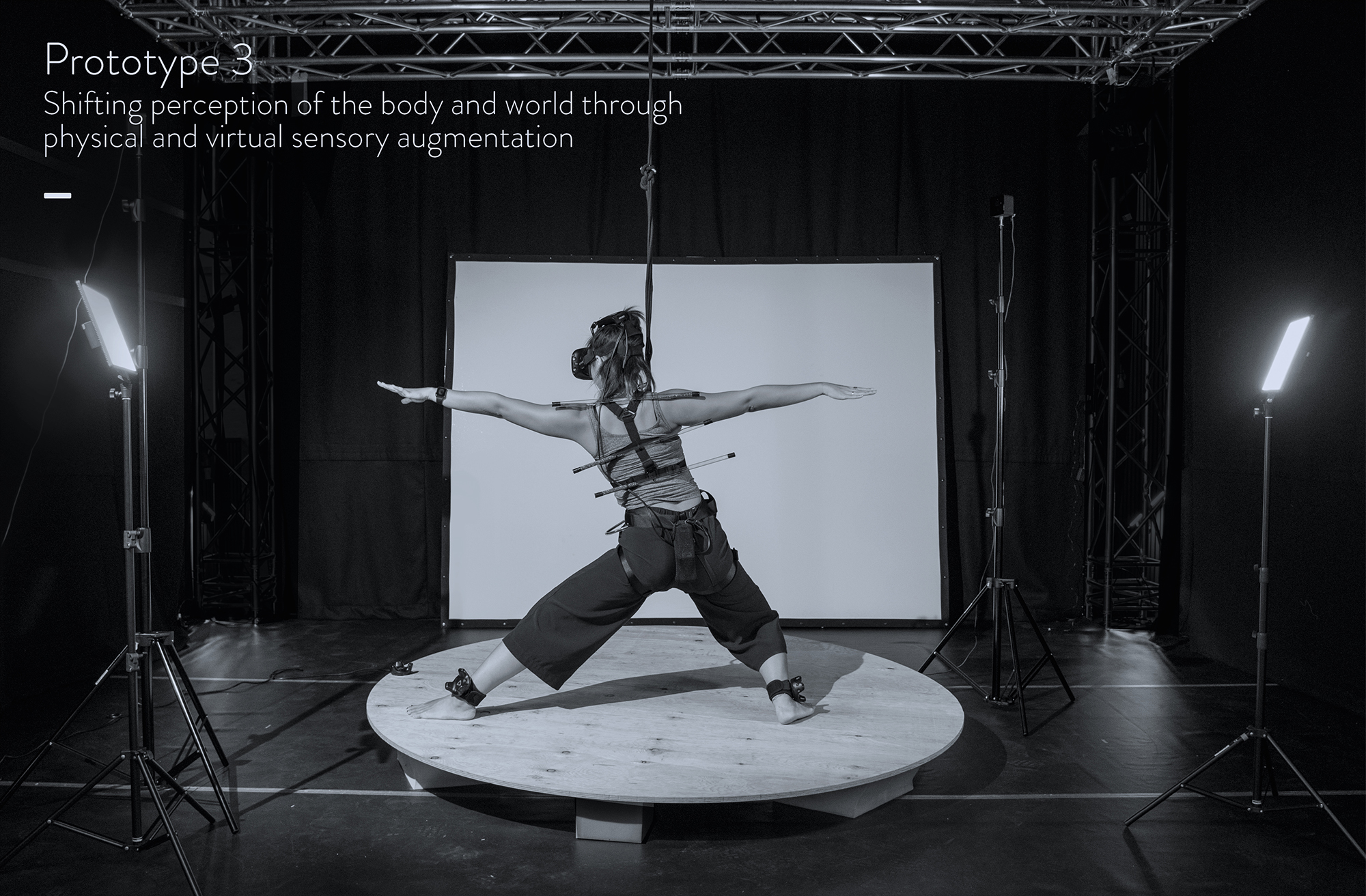 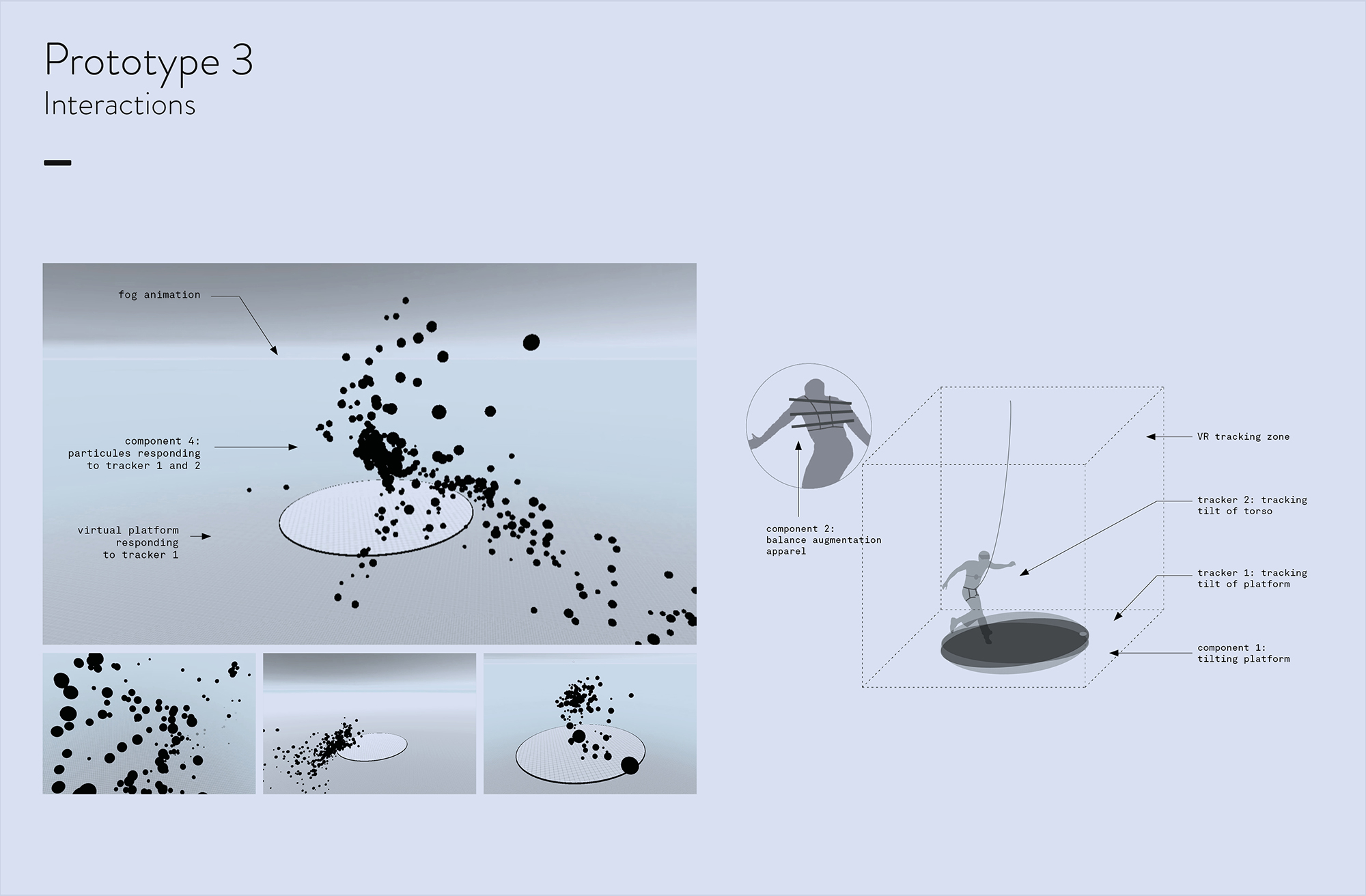 Prototype 3: Augmenting the perception of the body in movement through XR.

The third prototype looked at how to combine VR with the apparel and platform, in the aim of allowing a wider audience to get fully immersed in the experience. Here the body emits particles responding to the movements of the participant and rotations of the platform, visually supporting the behaviour of the physical beads shifting within the apparel. Bringing the experience to Ars Electronica allowed for a large public to play and explore, from children to adults, people who never experienced Vr to professionals. People started moving, from head to toe, slow to fast, exploring the limits of their own bodies. The experience brought their attention mainly inward. 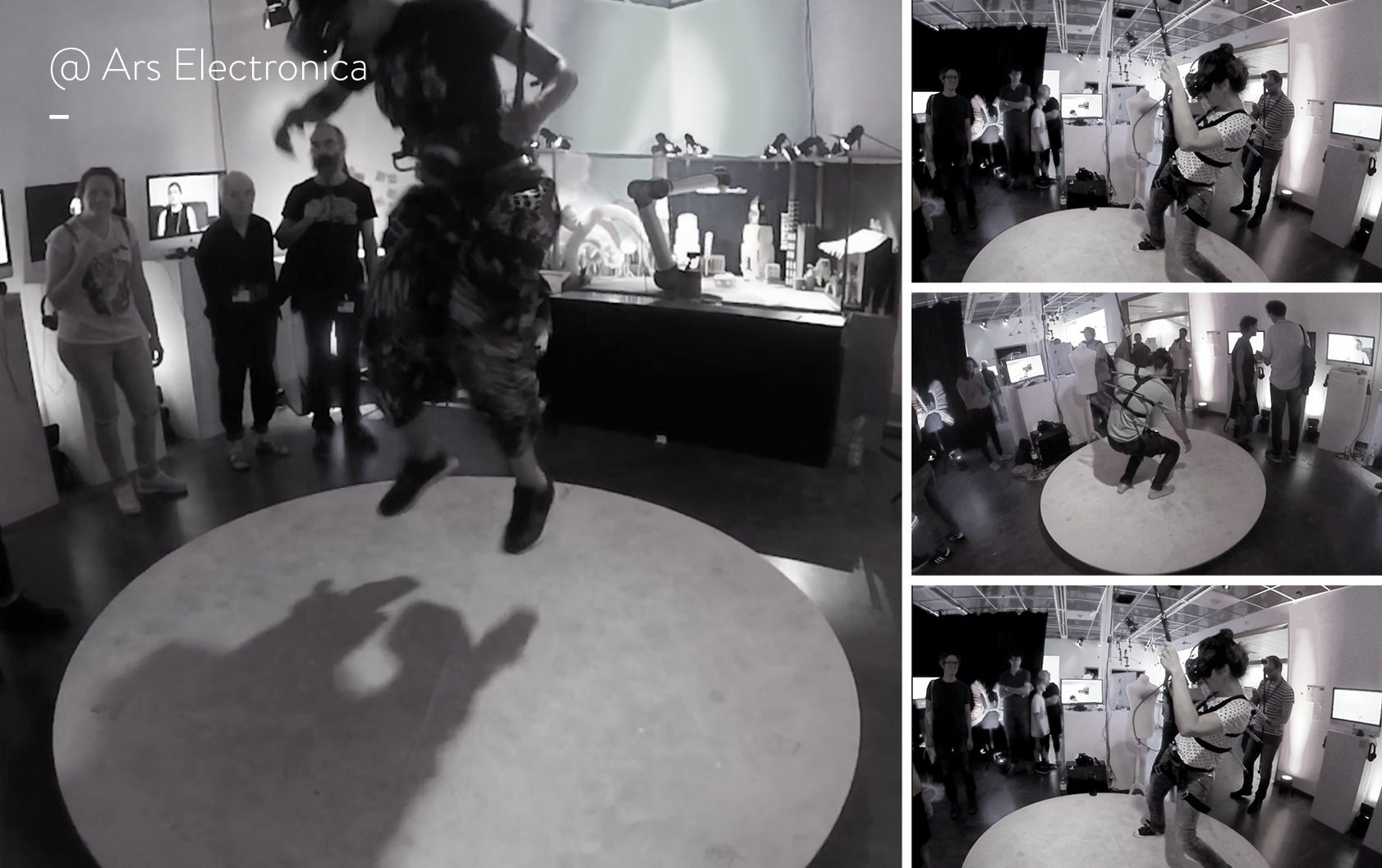 As an experience designer, Elyne strives to create experiences sparking curiosity,
exploration and movement. Her work sits at the intersection between humans and environments, physical and digital, textures and motions, sensuality and systems. She provokes interactions between people, places and/or brands.
Curious human being coming from La Réunion (french island in the Indian Ocean), she has  7
years experience in design, intertwined with 8 years of design studies. These were concluded by an M.Arch at the Interaction Architecture Lab (Design for Performance and Interaction) with distinction from the Bartlett, UCL, London. Passionate about human’s perception, emotions, and individual and social behaviours, she finds empathy and systemic thinking to be at the source of her creativity.
The two intertwined pillars of her practice are interaction and spatial design. On one hand, she explores interactions between people and environments through the design of physical and virtual immersive experiences. Her latest piece, (un)Balance, was exhibited at Ars Electronica festival, Austria. On the other, she designs spatial experiences for clients such as Microsoft, the NHS and Wembley Park. Through combinations of interiors and art installations, she infuses workplaces and healthcare environments with unique spatial identities and enhances staff and visitors experiences. Her latest role was lead designer at Acrylicize, London based art & design studio.
Motion plays a key role in her designs. Wether in the form of motion graphics, kinetics or
programmed light installations, they enable her to induce movements, translate ideas and spark emotional responses.
Today, she is looking at channeling her practice to envision new everyday interactions with emotional health and social equity in mind.