(Un)Balance is an experience in XR (extended reality) which rethinks human-spaces interactions by foregrounding the notion of embodiment. It provokes body awareness, movement and exploration. 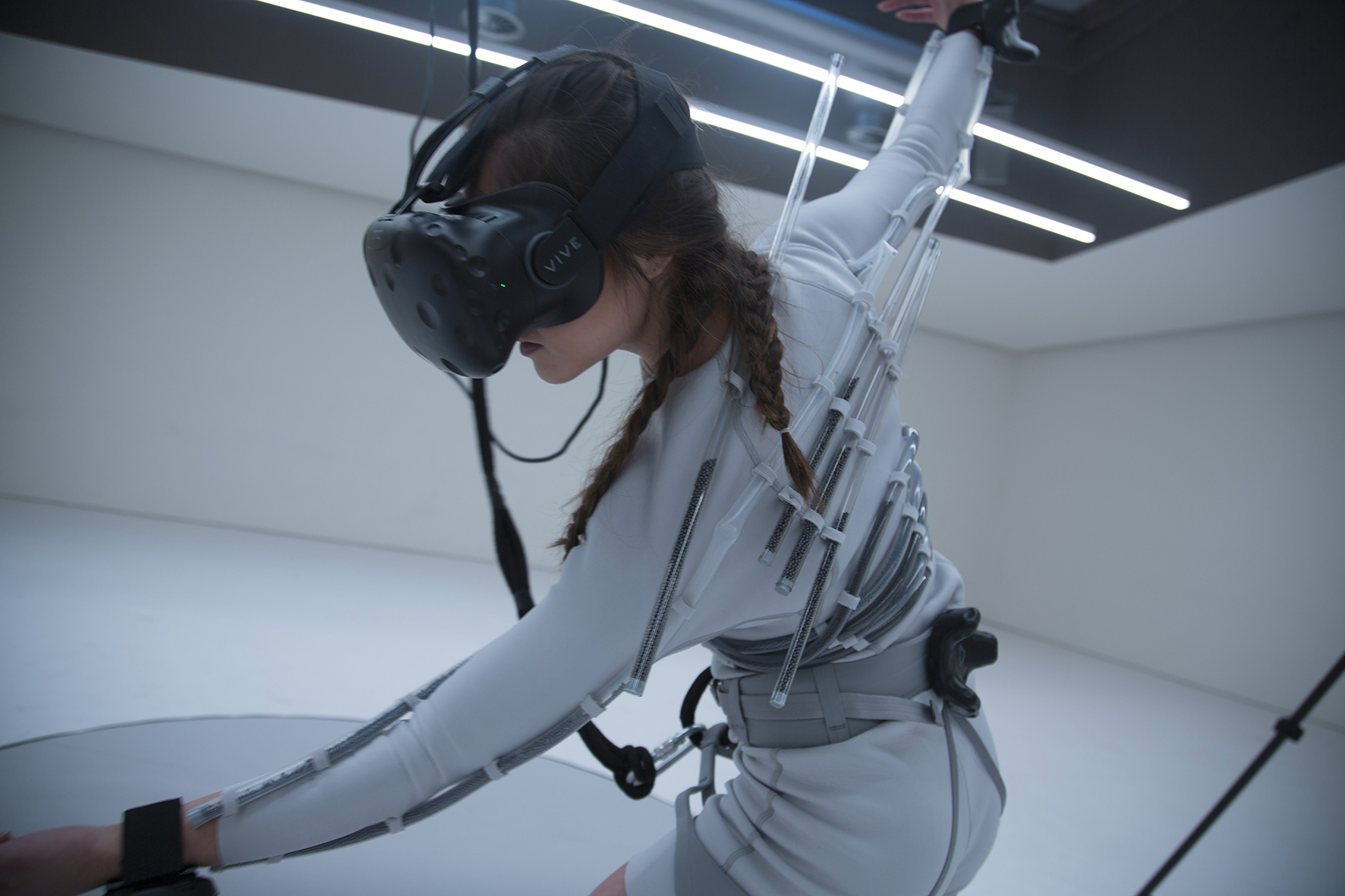 Today, our western world is slowly welcoming the idea that body awareness and body movement play key roles in our physical and emotional healths. However, we increasingly evolve towards spatial contexts and interactions which tend to limit and control our moving bodies while dispersing our daily attention through constant visual stimuli. Most interactive experiences in VR are no exceptions, as they primarily play off the visual sensory system, de-engaging users from their own bodies.

(un)Balance is an interactive experience in XR (extended reality) inviting users to play on the edge of stability. It rethinks immersive interactions, and in particular VR experiences, by foregrounding the notion of embodiment. Here, the XR experience aims at training curiosity, exploration and body awareness. Its design is inspired by Somaesthetics theory which highlights links between body awareness, unusual movements and perception of the world.

(un)Balance has been awarded a Lumen Prize 2020 in the XR category, as well as nominated as Best of Animation 2019 by Are Electronica Festival.

In a 10 minutes solo experience, players are invited to play on the edge of stability.  VR technology is combined to two analog tools, a wearable and a tilting platform. They merge into visual, touch and sound stimuli, augmenting the player’s perception of her body and environment. She moves on a tilting platform pushing her sense of balance to its limits. Lead beads embedded in the platform are displaced as it tilts, allowing auditory stimulation in response to her movements. She also wears an apparel on the torso which augments sensations of shifting weight and contributes haptic and auditory stimulation. It does so by displacing lead beads within thin silicon tubes. Made of thin neoprene, the apparel has structure to hold the weight while allowing haptic sensations through it. Finally, a VR headset and a set of motion trackers placed on the player’s body and platform enable a virtual avatar and a virtual world to change in substance and gravity attraction in response to her movements. The quiet minimalist world, designed in hues of muted greys, aim for visual stimuli to be kept in balance with other stimuli. The experience evolves through time, getting the player’s awareness to flow between her body and the environment. The interplay of multi-sensory stimuli, enhanced by non-linear responses, awakens the player’s curiosity. Made unusually aware of her moving body and environment, she is provoked to engage in a truly exploratory process, through movement.

(un)Balance questions the possibilities offered by XR experiences in contexts such as emotional health therapy and moving meditation. 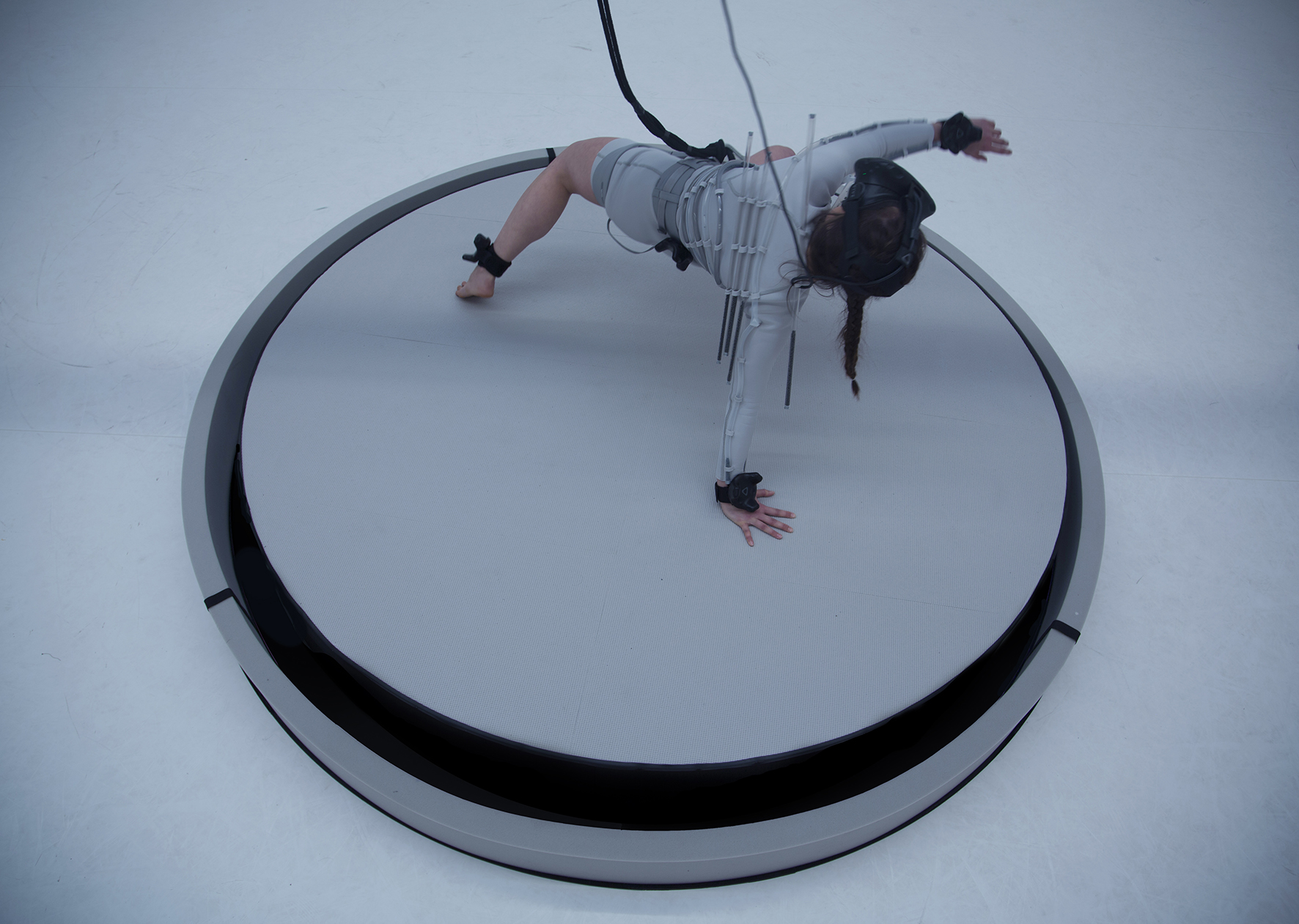 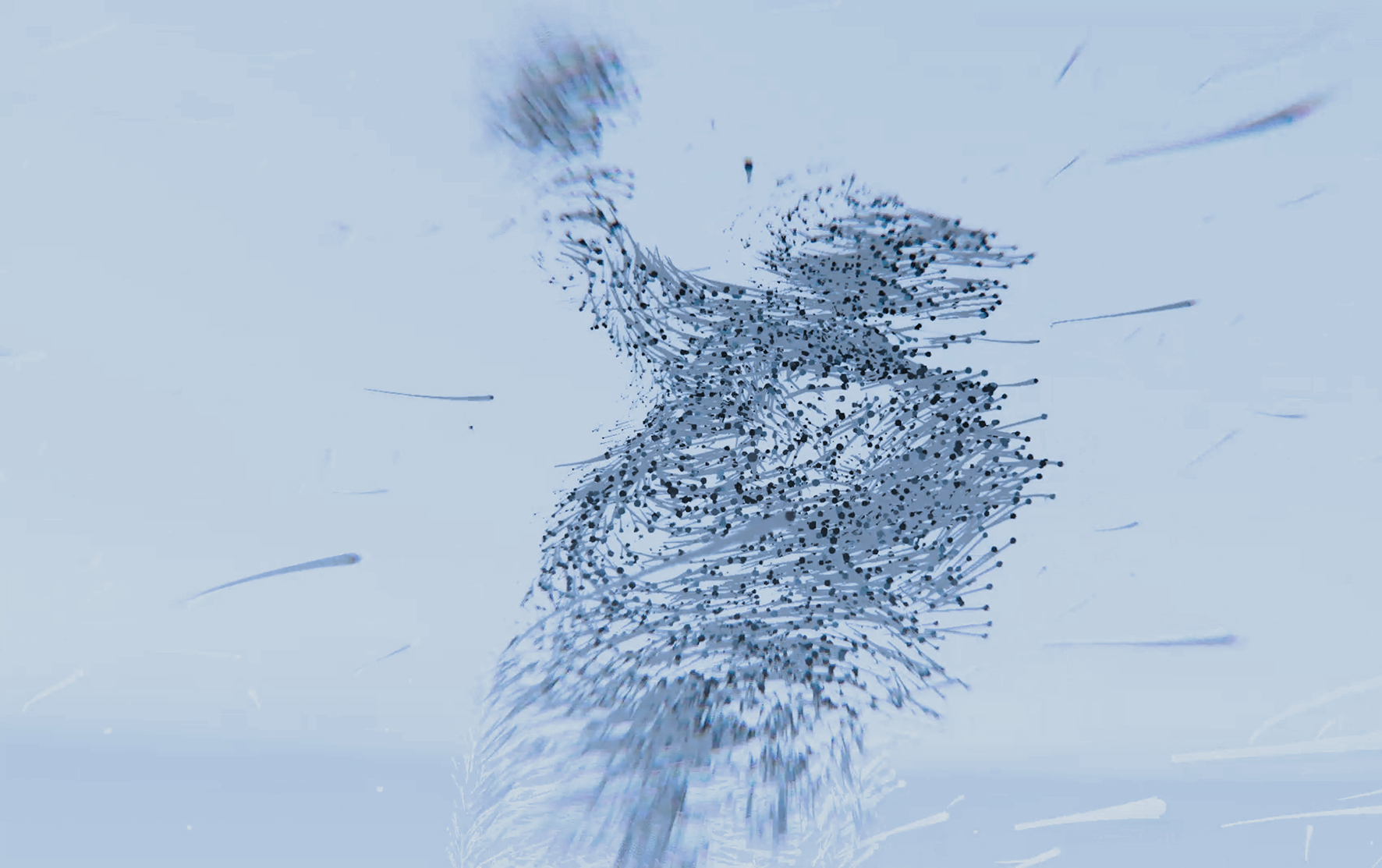 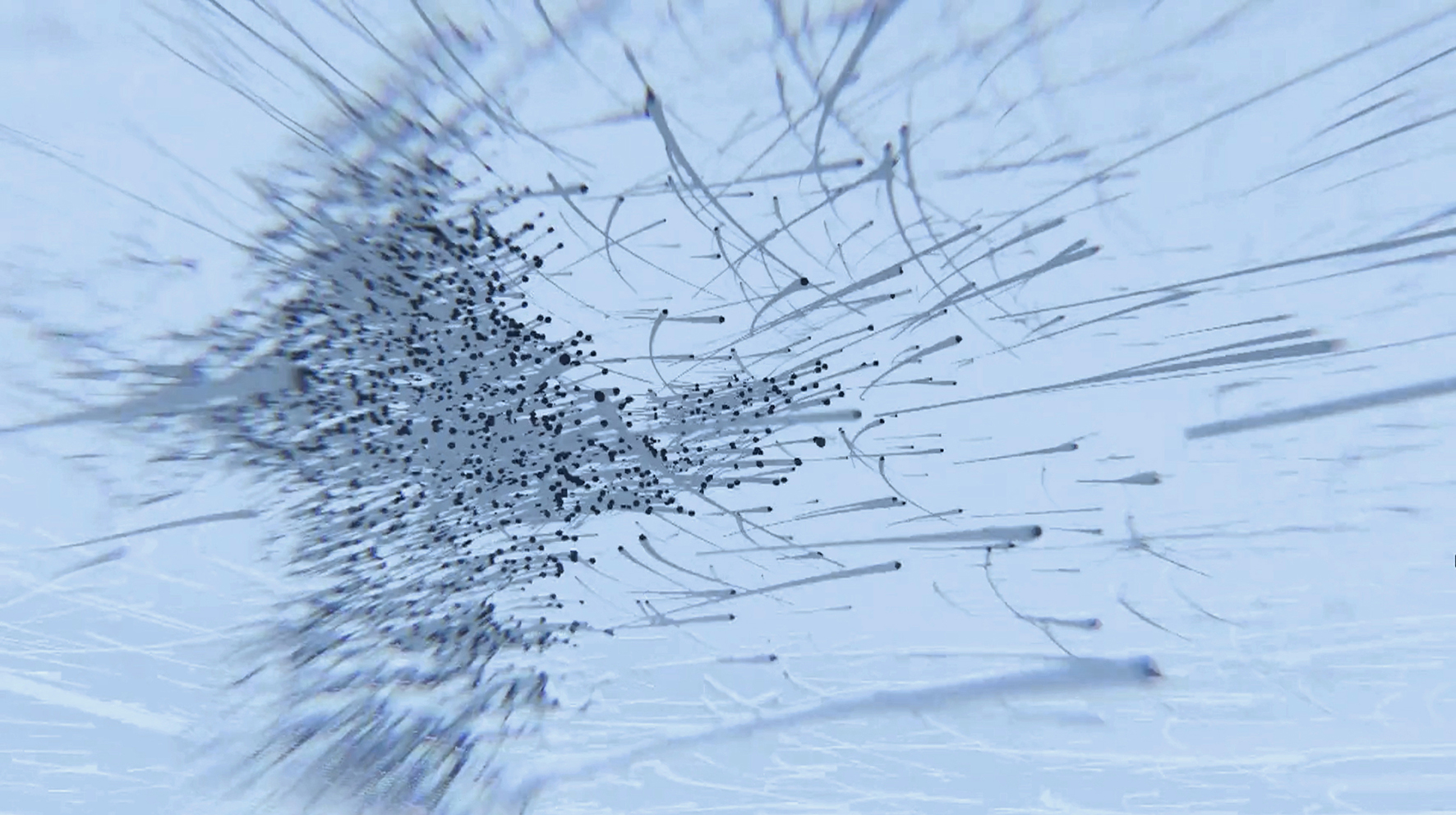 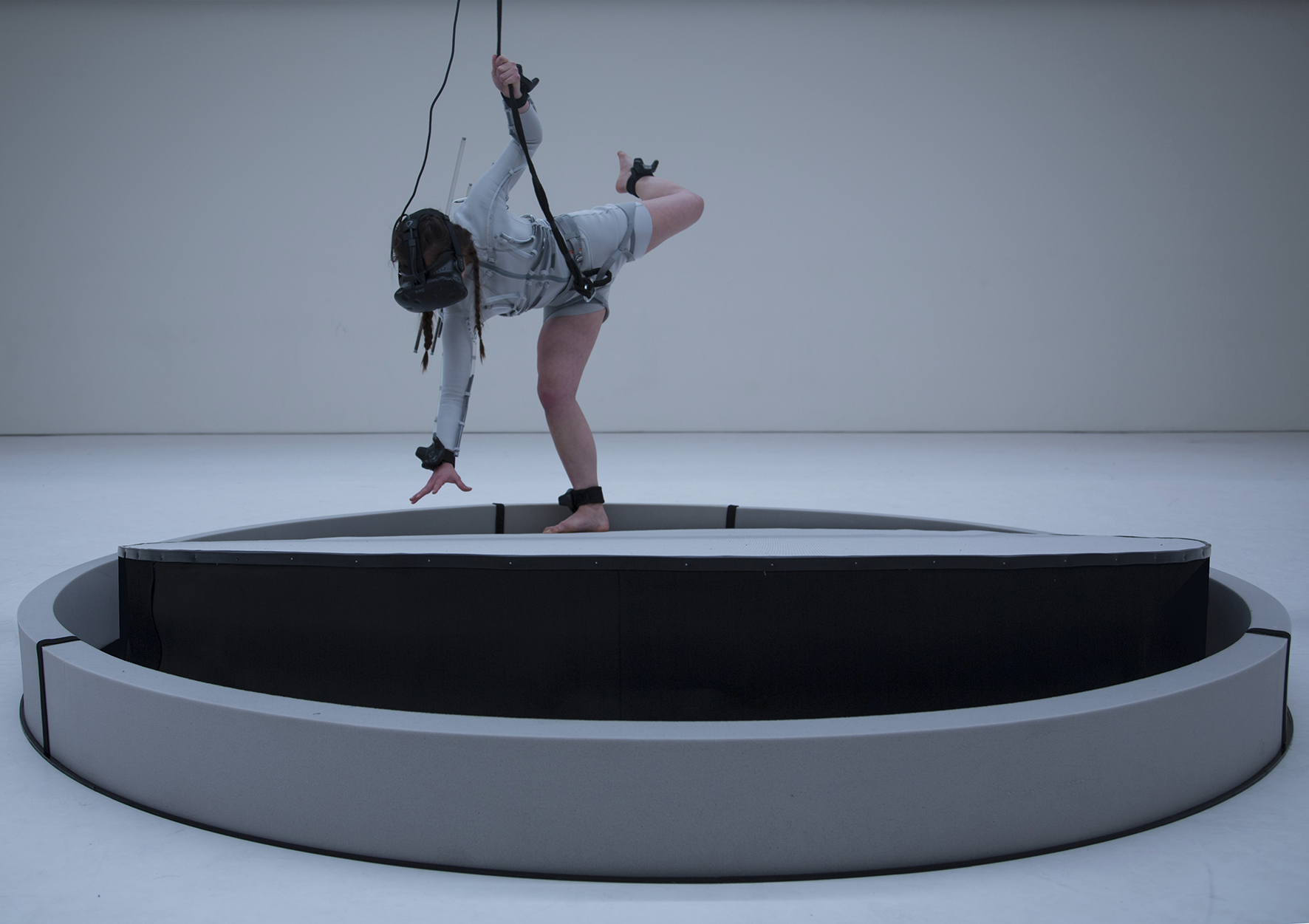 As an experience designer, Elyne strives to create experiences sparking curiosity,
exploration and movement. Her work sits at the intersection between humans and environments,
physical and digital, textures and motions, sensuality and systems. She provokes
interactions between people, places and/or brands.
Curious human being coming from La Réunion (french island in the Indian Ocean), she has  7
years experience in design, intertwined with 8 years of design studies. These were concluded by
an M.Arch at the Interaction Architecture Lab (Design for Performance and Interaction) with
distinction from the Bartlett, UCL, London. Passionate about human’s perception, emotions, and
individual and social behaviours, she finds empathy and systemic thinking to be at the source of
her creativity.
The two intertwined pillars of her practice are interaction and spatial design. On one hand, she
explores interactions between people and environments through the design of physical and virtual
immersive experiences. Her latest piece, (un)Balance, was exhibited at Ars Electronica festival,
Austria. On the other, she designs spatial experiences for clients such as Microsoft, the NHS and
Wembley Park. Through combinations of interiors and art installations, she infuses workplaces and
healthcare environments with unique spatial identities and enhances staff and visitors
experiences. Her latest role was lead designer at Acrylicize, London based art &amp; design studio.
Motion plays a key role in her designs. Wether in the form of motion graphics, kinetics or
programmed light installations, they enable her to induce movements, translate ideas and spark
emotional responses.
Today, she is looking at channeling her practice to envision new everyday interactions with
emotional health and social equity in mind.