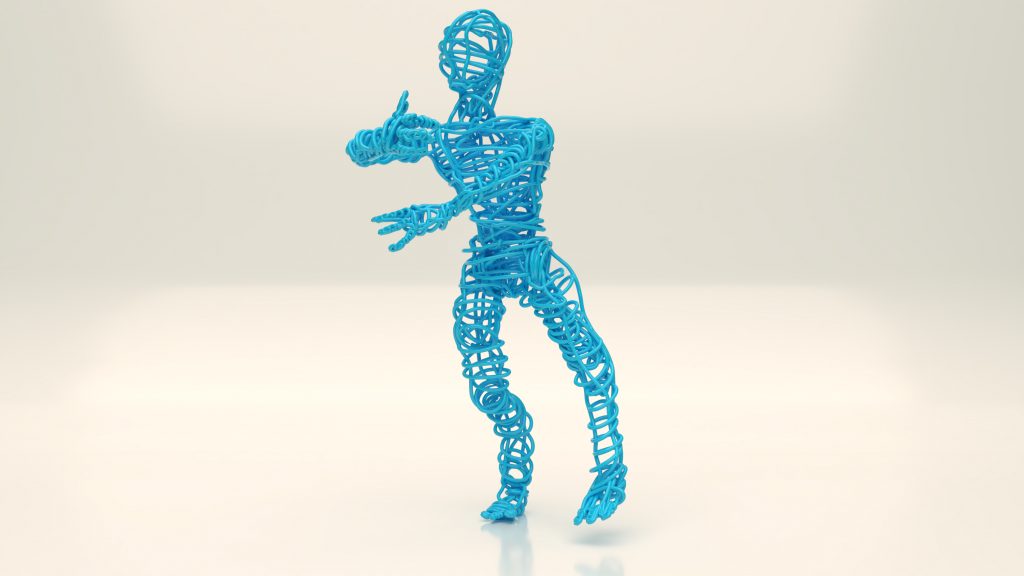 “Birth of a Cyborg”

Hallidonto’s work relates to his “Cyborgia Manifesto” his main focus is drawing; The essence of the cyborg became my own. The cyborg image has been an integral part of my childhood. The cold war had just ended – the cultural landscape of the ’80s was very much rooted in the future, the natural feeling of that time was dystopia from the cartoons/films, I watched as a kid, the advent of console gaming: Nintendo, etc. The image of man was always his metamorphism into the machine, or the machines taking over. I identified with the cyborg image, and I wanted to be one. I identified with the concept of such a being, and it has informed my work to date. They are infantile and simplistic in their appearance but not in their construction, being drawn in one continuous line. The continuous line has such intrigue the build-up of lines mirrors the essence of double helix structures akin to DNA, that create these lifeforms.

My technique of drawing is a continuous line, with fluid and eloquent gestures I create these Cyborg organisms, My VR work has a similar application of Calligraphy, powerful strokes that embody a bold and powerful line, the simplicity of the composition evokes an ethereal space, the line and negative shapes compliment each other akin to the principles of Zen, I am interested in the Shodo style of performance Calligraphy painting, the performative aspect, parallels my technique when using virtual reality to perform this piece, the performance itself becomes a visceral act the ability to use my whole body becomes cyborgian itself using this equipment. I’m the creator, I’m creating a life form. I think the ability for me to actually bring a tangibility to these drawings, it’s not losing the essence of Hallidonto the artist, it’s actually, by virtue, bringing my whole essence into that piece.”

Through the residency, I would like to perform the “Birth of the Cyborg” within the gallery space and collaborating with musician Ed Woolroofle, through experimental sound and VR drawing.

There’s always this uniqueness to the piece because I know I’m going to draw a figure but I don’t know how it’s going to come out,”  “It’s real-time and making decisions in real-time so that’s kind of a unique thing for me because it’s always a challenge.

Virtual Reality combined with 3D printing technology creates exciting pathways from traditional processes – Standard 2 dimensional drawing practices has limitations, and I argue that visual construction is often confined to the flat space (paper, wall). By releasing the lines and mark making from a 2-dimensional plane- virtual reality opens up the opportunity for me using my continuous line style in real time, thus giving the drawings a tangible reality and reveals the artist’s performative approach to creating work. This is revealed through my ability to construct these works in digital virtual space which can be transformed into 3-dimensional sculptural pieces using both traditional and 3D printing techniques, the works call also be viewed within the digital space via VR headset.

Hallidonto is a Scottish Artist based in London, England.